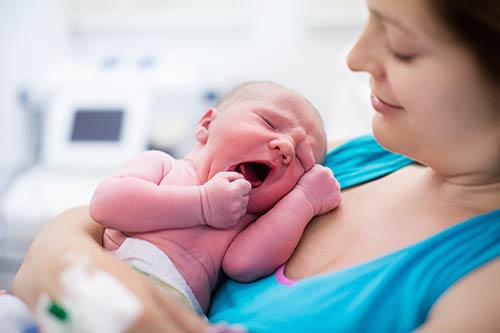 There are several types of delivery for our patients. Whether patients are seeing an obstetrician or a midwife at Rosemark, the provider will complete a comprehensive physical examination, review your medical and birthing history and then determine the options best suited for your specific situation.

The types of delivery performed are:

A vaginal birth is the natural method of childbirth. In this method, the baby is born down the birth canal and through the vagina of the mother. During this process, the mother will go through three different stages of delivery starting with labor and ending with the delivery of the placenta.

During the labor stage, there are three phases, Early Labor, Active Labor and Transition as outlined below:

During the second stage of delivery, the baby is born as the contractions of the uterine muscles push the baby from the mother. The birth or pushing stage can be as short as a few minutes or as long as several hours during which the delivering mother may have a strong urge to push or bear down with each contraction. During delivery, the mother will follow the directions of the obstetrician or midwife. When the baby crowns (baby’s head starts to emerge) one may feel a burning pain caused by the stretching of the perineum.

Cesarean birth is the delivery of a baby through incisions made in the mother’s abdomen and uterus when a vaginal birth is not optional.

The following situations are some of the reasons why a cesarean birth is performed:

During a cesarean delivery, a nurse will prepare the patient for the operation by inserting an intravenous line into their arm or hand that will allow fluids and medications to flow into the bloodstream during surgery. The patient’s abdomen will be washed, pubic hair may be trimmed and a catheter (tube) will be placed to drain the patient’s bladder.

Appropriate anesthesia will be administered and then an incision is made through the skin and wall of the abdomen. The skin incision may be horizontal or vertical, near the pubic hairline. The abdomen muscles are not cut but are separated to make room for the surgeon to make another incision in the wall of the uterus.

Through the incisions, the baby is delivered along with the umbilical cord. Next, the placenta is removed and the uterus is closed with stitches that dissolve in the body. Either stitches or staples are used to close the abdominal skin.

If an epidural block is used instead of general anesthesia, the mother will likely hold her baby right away. Soon after surgery, the catheter is removed from the bladder and the patient is taken to a room for monitoring. Mothers should be able to breastfeed right away.

Plenty of rest will be required which typically includes a hospital stay of 2-4 days.

Some women who have had a cesarean birth before may be given the option to give birth vaginally which is known as a Vaginal Birth after Cesarean Delivery (VBAC). The decision to attempt a VBAC depends on many different aspects of a patient’s history.

When a VBAC is the chosen method of delivery the attempt to give birth vaginally is termed Trial of Labor after a Cesarean (TOLAC). It is, in fact, a trial of delivery which may quickly turn to a cesarean delivery in case of complications.

The benefits of a TOLAC:

Risk of a TOLAC

Talk with your Rosemark Doctor or Midwife about the type of delivery you would like to have and they help you to understand the risks and benefits of your choices.